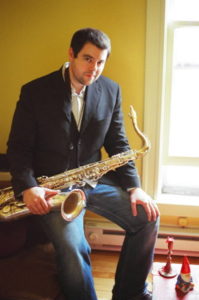 “I still have to deal with pain in my hand and wrist and shoulder; it kind of runs up my whole arm. But other than giving it more time (to heal), there’s not much else I can do. Unless something is absolutely life or death, I don’t recommend surgery. I tried it after I lost my finger.

“But, physically, I’m doing pretty good,” adds Catalano, whose optimism and exuberance always have been evident in his larger-than-life playing. “Mentally, I’m excited.”

For good reason. In the next couple of months, Catalano will release the first of three recordings he made last year.

“Old Skool” pairs him with pianist Scott Williams in duo settings of jazz standards, such as “Bye Bye Blackbird” and “Our Love is Here to Stay,” plus an original homage to one of Catalano’s heroes, Von Freeman: “Blues for Vonski.”

After that will come a duo CD with the inimitable Chicago drummer Paul Wertico and a trio album with former Smashing Pumpkins drummer Jimmy Chamberlain and Brand X bassist Percy Jones, which promises to be a high-powered, high-energy affair.

“It’s definitely a jazz album,” says Catalano of his partnership with Chamberlain and Jones. “Yeah, Percy has played on Brian Eno records, and Chamberlain with the Smashing Pumpkins, obviously, but they’re such good players in a jazz setting too.

“I knew it would be a powerful trio, but it has ballads also.”

More important, the repertoire is real jazz, including Rahsaan Roland Kirk’s “Serenade to a Cuckoo,” John Coltrane’s “Equinox,” Wayne Shorter’s “Footprints” and a work Catalano penned for his wife, whom he married a couple of months before his auto crash.

The very fact that since that terrible event Catalano, who always has been an exuberant, extroverted player, has been recording in such intimate contexts seems as intriguing as it is promising. For if Catalano always has leaned toward epic-scaled statement, perhaps he’s taking a somewhat different tack now. Maybe he’s personalizing and deepening his approach.

Certainly, he appears to be regaining his energy, for he’s back to doing the late-late shows Wednesday nights (early Thursday mornings) at the Green Mill in Uptown, an engagement he loves because, he says, it enables him to develop new material.

Most important, Catalano sounds ready to go in the new year.